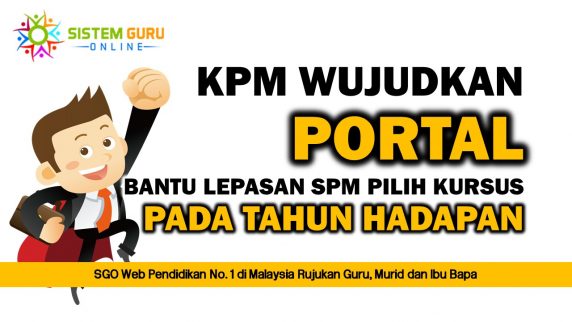 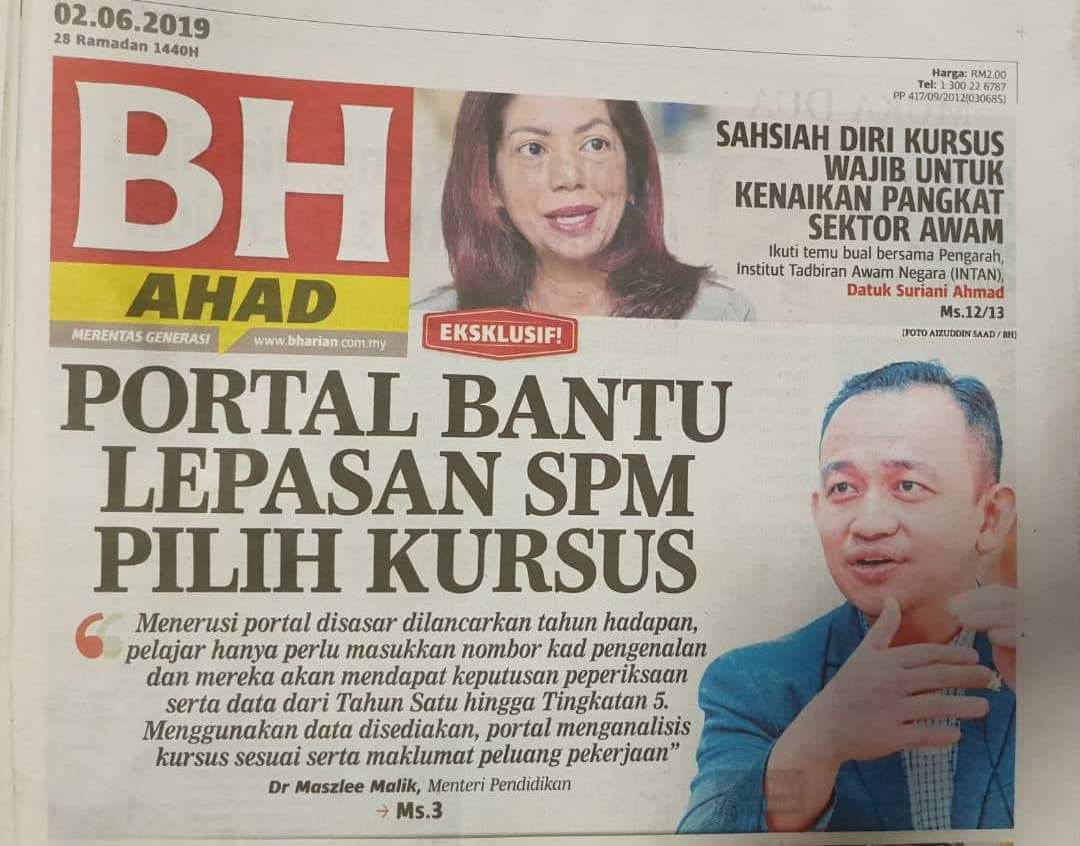 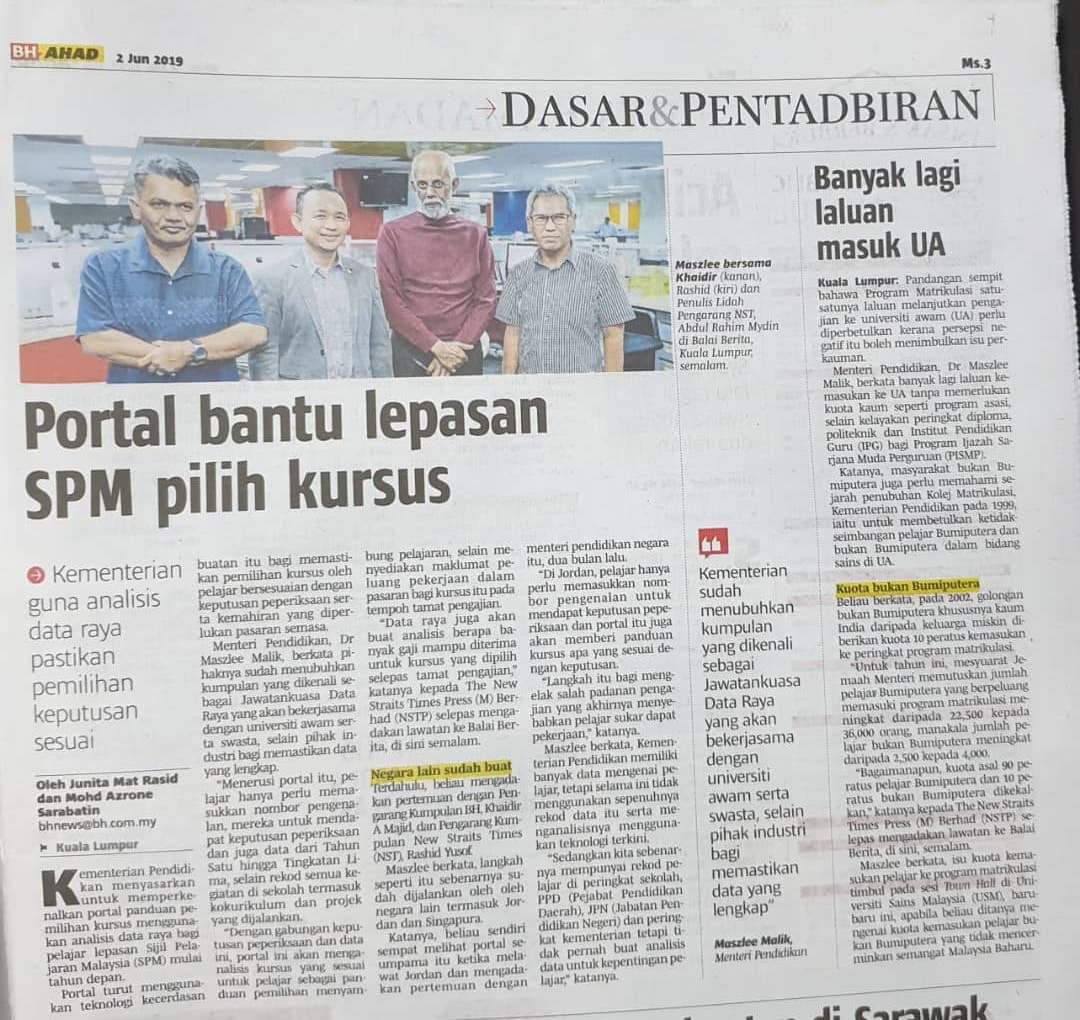 KUALA LUMPUR: THE Education Ministry is developing a centralised all-in-one portal that will not only provide Form Five leavers their Sijil
Pelajaran Malaysia examination results, but also help them
determine their education path upon completing secondary school.

This portal is targeted to be launched next year, Education Minister Dr Maszlee Malik told the New Sunday Times in an interview at Balai Berita here.

He said the portal aimed to
prevent mismatch and to provide students with a general picture of their education and career outlook in the next five years.

The information will be personalised in accordance with the student’s academic and co-curricular achievements, as well as psychometric tests.

“Through this portal, SPM students would not only get to view their examination results, but they would also be able to see recommendations on their best-suited pre-university courses and even available scholarships for them to apply.

“Using artificial intelligence (AI), the machine will crawl Internet databases and give recommendations on appropriate courses, the universities or institutions that offer the courses, and available scholarships and other financial aid.”

Maszlee said his ministry was gathering student data from
departments to populate the portal.

He said the establishment of the portal would not burden teachers or result in extra administrative work for them as all the information required was already available.

Teachers need not input anything extra.

Currently, students could obtain their SPM results directly from their schools or state Education Departments.

They could also check their results via short messaging system (SMS) or the Examination Syndicate website.

The Education Ministry does not have a dedicated platform to guide students on an education path based on their examination results.

Students have to figure out their path on their own through various sources, including teachers, career guidance talks and education fairs.

Taking inspiration from Jordan’s Education Ministry, Maszlee said the portal would include the students’ school data, presentations and projects, co-curricular activities, and psychometric tests from Year One right up to Form Five.

To access the information, all school leavers needed to do was to input their identity card number into the centralised portal, he added.

Through this portal, they would be able to access applications for matriculation programmes, and public university diploma or foundation programmes through the ministry’s Central University Admission Unit (UPUOnline).

“Of course, with such sensitive data, we will have to be careful with the Personal Data Protection Act 2010.

“Other countries have been doing it, so it’s not impossible for us to do it as well,” said Maszlee.

He admitted that his ministry had not been paying attention to data and data analysis, adding that the available statistics should be fully utilised.

“We have students’ data from schools, states and district education departments, but we have never made use of them or analysed the data for the interest of students.

“We admit that this has been the ministry’s weakness and we want to overcome it.”

He stressed that it was vital that the ministry used all available tools such as big data, AI and blockchain technology, adding that the portal was an important step forward.

“With this portal, we can also educate and guide our children and their parents to make the proper and correct choice for their future education and career paths.”

On whether the centralised portal would ensure transparency with education quotas, particularly with the current matriculation conundrum, Maszlee said: “We should go beyond matriculation.”

Recently, the ministry’s
matriculation programme came into the spotlight after a cabinet decision to keep the quota system, which allocates 90 per cent of seats to Bumiputeras and the remainder to non-Bumiputeras.

This was despite the agreement to increase student intake into the pre-university matriculation programme to 40,000 from the present 25,000.

“We have a lot of promising job opportunities and both the students and parents need to realise that there are many other opportunities apart from matriculation programmes.”

The portal, he added, would bring “obscure” areas and courses into the mainstream, and described it as the “next big thing” for his ministry.

He said he believed that through mining of data, there would be greater element of democracy in proportioning opportunities.